two kids and a campervan

our one wild and precious life

So here we are in Scotland, a place that has never been on my bucket list (I don’t actually have one) and never really been on my radar. Don’t know much about Scotland. It’s more like a castle on a cloud to me, bygone, ancient, misty, out of reach. And yet when the opportunity to travel here materialised I became rather excited to visit this faraway land.

Guy’s childhood friend Oran lives in Newcastle, England with his wife Josie and six year old daughter Gaia. We had always planned to visit them on this big trip and given they also have a campervan and Newcastle is less than an hour’s drive from the border of Scotland, it made perfect sense that we should cross over. We are now four days in and it is for want of a better word – epic.

The photos really speak louder and more articulately than my mere words and one thing I have realised about photos on this big trip is that you really need to be in them, in their humble abode, to fully appreciate the magnitude of a place. Yes, this is obvious I guess, but yesterday, as I stood on a mountain I had climbed with Lina on my back, looking out at the lush mounds and sheep grazing and the sky’s absolute vastness – I realised that no amount of photos could capture this moment. If Denmark was like stepping into a Hans Christian Anderson fairy-tale, Scotland is like stepping into Viking territory, Game of Thrones (dare I utter!). It is breathtaking, wild and raw. Even the smell of sheep poo is intoxicating in Scotland.

Our first stop was at Ingram Valley, still in England. We spent the day lazing around the river in the deep valley, eating, watching the sheep, playing guitar and getting acclimatised to the place and each other. We then drove to a parking spot in Wooler for the night. Lina and I woke early the next morning (well Lina woke up and then I was woken) and when we opened our little window there was a rabbit or hare eating its breakfast opposite us. Took me back to my childhood where I have a distinct memory of seeing rabbits near our little cottage in Phillip Island, Victoria. When I mentioned this recall to my dad on FaceTime he said he can still smell the toast from that picturesque holiday. 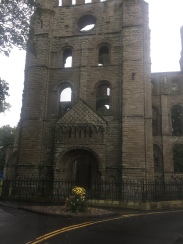 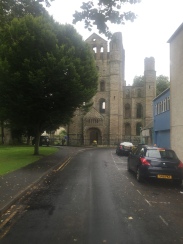 Later that day we pushed on further north to the Scottish borders and passed through Kelso which was ever so enchanting. It was a rainy morning and we drove through cobbled towns, past stonewalls and carcass churches, all the while looking through our rain dropped windows at diners lunching in cosy inns. The girls were sleeping soundly so we didn’t stop to eat but rather enjoyed the quiet drive, the rising and falling hills and the arched trees welcoming us the farthest north either of us have travelled in the United Kingdom. We stopped in Selkirk for lunch at a small inn and enjoyed a hot three-course Sunday meal and the best apple tart I have ever eaten. The only other diners were a son and his mother – she owns a pub in the next town and he is the chef there. They were friendly with the kids, especially Lina who has become quite the charmer complimenting people on their shoes, dresses, hair colour, breasts and high heels. 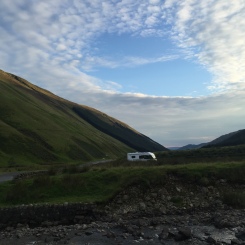 That afternoon we met up with Oran and co at the foot of Grey Mare’s Tail Waterfall – our camping spot for the night. This is considered wild camping in that there are no basic facilities – no toilets, electricity, showers, water and no camping fee. Our campervan is perfect for such a set up and we came prepared with enough drinking water.

In these new more rugged surroundings I have observed Noa more intently and have witnessed her growth, her confidence and her incredible determination to explore more of the wild and the wild in herself. Having Gaia, someone a little older and very relaxed in nature, has been wonderful for her (and Lina too). The girls have run off together, climbed rocks and trees, found treasures and Noa has been so keen to partake in these ventures. I have watched my fears and given in to them too and then stepped away and surrendered that this is part of growing up – for both of us.

As the sun began to set we became acquainted with midges – annoying little flying creatures that bite and arrive in their masses. But nothing could detract from the absolute beauty surrounding us. Our two vans were burrowed in an emerald valley by the side of a river with hundreds of sheep dotting the hills, their bleats in symphony with the trickle of the river – a far cry from urban sounds.

The next morning Lina rose early again and this time we opened our block-out blind to see green – lush green hills rising out of the meandering highway and of course the sheep, eating their breakfast, doing what they have been doing for eons. Once everyone was up, dressed and fed we began our day’s climb to meet the lake that created the river that held Grey Mare’s Tail Waterfall. Noa had a cold (still does) and we knew this ambitious ascension would be challenging for her so we agreed that I would carry Lina on my back in the Ergo (money so well spent) and Guy would carry Noa if necessary. And so we began. Accompanied by a few protests and new signs of vertigo from Noa we climbed and we trekked and we became one with the mountain. 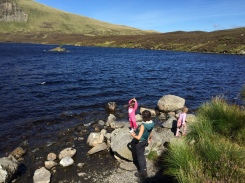 Many times Lina and I slowed behind the pack to regain my strength and as I stood there overlooking the magnificent scene before us, so much came to mind. I grew up in the shtetl of Caulfield, Melbourne. I knew mostly only Jewish people growing up and all these people descended from Eastern Europe (bar one Scottish Jewish mum Hazel who is happily reading this post). Though we had a Greek dressmaker a few streets away and Lebanese neighbours next door and of course some ‘Aussie’ babysitters, there were few people in my life that were more than one generation Australian or who descended from British soil.

It was all quite foreign to me until I finished high school at eighteen and left my safe little sanctuary in Caulfield for the greater Melbourne and the world. Then I met Australians who harked from the old country – the United Kingdom, whose families were part Irish, part Welsh, part English, part Scottish or Gaelic or Celtic. They came from these faraway kingdoms where kings and queens and knights had once lived, Vikings had galloped on horses, where armies had fought for land and power and brotherhood. And now as I looked over these lands, these mounds that kept rolling into the distance, I could imagine these long-gone times, this incredibly rich history and I somehow understood these friends better now. Their histories and her-stories and the long line of ancestors that I hadn’t really pondered much until now. And I felt closer to them than I ever had. I was standing in their galaxy now and I could feel it in my wee bones.

And of course I couldn’t help but envisage all the films I had seen, the books I had read, the poetry, the TV shows, the artwork. All these stories were now coming alive in front of me. Men on horses, armour and swords, the battles, the suffering, the honour, the passion. I won’t get into my feminist reading of all this (leaving that for a post on women of the world) but I will add that up until this point the United Kingdom has felt very masculine to me and I am longing to discover the feminine. Every castle belonged to a man and his offspring and was passed down the patriarchal line. I feel that here. I feel that patriarchal pull strongly. I wrote to my dear wise friend Maree Lipschitz as I had remembered her going on a wild goddess tour somewhere in this vicinity and she forwarded on some links for me to consider. I will be considering this and I am now making it my duty to find the feminine in this great old kingdom. Of course it’s here. Women have been here as much as men, potentially longer given they rarely went into combat. Maybe it’s hidden away or less advertised or less known – but I will try and tap into it. I will find it.

We are now at Loch Crearen (Dallachulish Farm) and we have wild parked on the side of the road smack in the middle of the greatest view of Crearen. All the signposts here are written in English and Gaelic and of course this makes me very happy. Yesterday we stopped in a small fishing town called Oban. We walked around in the rain, bought our first wellies and got a feel for this charming little town. We also sat in a café overlooking the water. The kids and Guy were drinking hot chocolates and I had my pot of tea as part of my Scottish high tea. We read some books (in English!) and lounged around on the couches while Lina helped the waitresses by bringing all our dishes to the counter. We then picked up some fish and chips and gobbled it up as we drove to our camping spot for the night.

This morning we awoke to the stillness of the Loch and the pitter-patter of rain on our roof. It’s cold out today but of course we got our wellies on and took to the rocks while the tide was out. Today we will head off across Scotland to Edinburgh. We want to see how a big city runs in this distant land.